It was mentioned in comments, but does deserve more of a tribute than a mention.

Andreas Katsulas, the actor who brought G’Kar to life through both deliberate actions and memorable words, died from lung cancer on the morning of February 13. 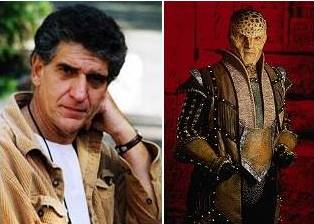 His performance as G’Kar was nuanced and masterful, as we saw that character grow from being selfish and bitter to one who literally embodied the heart of the station’s purpose, and everything that those who wanted peace imagined it could be.

Most of G’Kar’s heart came from Andreas’ talents as an actor. He will be missed.

The next show to go out was recorded well before this happened, but we will talk about it for the following show.

update: There are online tributes to Andreas, at Pat Tallman’s and Jeffrey Willerth’s Galactic Gateway, and over at Bill Mumy’s website. Pat has also created a way for fans to submit notes of condolences and well-wishes for Andreas’ family over at the Galactic Gateway forums. There’s a thread specifically for those thoughts, which she will print out and take to his family at the memorial service a few weeks from now.

Thanks to ISN News for the Bill Mumy link