Seriously, how do you guys like that Babylon Podcast Season 4 opening sequence? Crazy cool, isn’t it? 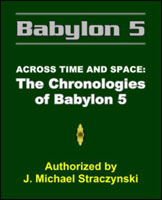 Contest: We’ve come up with a contest to give away a copy of the B5 Chronologies scriptbook! Can you identify all the voices in the podcast opening montage? If you think you can, submit your entries to contest [at] sliceofscifi [dot] com with the Subject line of Babylon Podcast Chronologies Contest, and include your mailing address.

We need all 12 voices correctly identified and in order, and a single winner will be selected from all the people who submit fully correct entries, and participants who helped with the lines are not eligible to enter this contest… maybe next time, gang.

Submit your entries by midnight Pacific time, March 3rd, and we’ll randomly pick a winner from pool of correct entries live on the live feed on March 4th. Every voice in there is known somewhere in the podosphere, so get cracking!

Discussion: Tim and Summer revisit the discussion about Ivanova’s “I am Death Incarnate” declaration before leading the White Star fleet up against the advanced EA Destroyer fleet. We compare it to President Laura Roslin’s speech from the recent BSG Season 4 episode “Blood on the Scales”, and Summer amends her previous assessment of Ivanova’s speech. She doesn’t hate it, like Tim and Mike do, but it definitely doesn’t rank as high in her estimation as before.

Voicemail: Arkle adds his thoughts about and full support for Ivanova’s “Death Incarnate” speech; Todd from Grand Rapids adds his comments about the Ivanova speech; a comment on how maybe they did hang up on Ivanova during her speech and no one told her about it.

Troy sent an email saying that Tim’s wrong about Ivanova’s speech, and how apropos it is for a warrior walking into her death; another email thinks that it appropriately displays her state of being near the breaking point, under the pressures of leading the fleet and being worried about Sheridan’s welfare in captivity.

Bethany from Oklahoma is catching up after being without Internet access while in Colorado for a month, and she watched episodes of “Babylon 5” on her drive back home through the Rocky Mountains… good thing she didn’t really have to watch the screen rather than the road; comments on the various themes in “Between the Darkness and the Light”, with the struggles of many of the characters being echoes of the title; Dave from Kentucky lets us know that there’s a large selection of Babylon 5 ships done in Legos; Doug calls in about #134 and the difference in sizes between the B4 and B5 stations; Gary has a question for Jeffrey about the Babylon 5 Mall Tour mentioned in some old issues of “The Universe Today”, and Jeffrey tells us what he remembers about the tour, a promotional venture by TNT to promote the upcoming new Season 5 episodes (paging Sandy Bruckner!)

Gary sends his apologies to Jeffrey for bringing Ed Wasser to the show for us to talk with; Edmund from Greenville wants to chat about “Intersection in Real Time”, and how it originally was slated to be the Season 4 finale, and thinks the way we ended up receiving the shows works better than the original plan; Bethany from Oklahoma shares her thoughts on “Intersections in Real Time”; Kate from Chicagoland has issues with the Shadow War wrapping up too quickly; Neil from Bowie comments on his shiny new copy of the TV Movies Scriptbook; Bethany from Oklahoma comments on the discussion for “Exercise of Vital Powers”; Gary lets us know that JMS didn’t win the BAFTA for The Changeling, and Jeffrey says that the winner, In Bruges, is well worth checking out.

And finally, the Return of Jarsto! Jarsto smacks both Tim and Summer for not remembering “In The Beginning” in detail in regards to how the Babylon Project came about, from Show #138 (Summer claims sleep deprivation); Jarsto chimes in again about Marcus gets the lyrics wrong during his rendition of “A Modern Major General”, and submits that perhaps the Vorlons, and NOT the Shadows, destroyed the first three stations, since they knew they’d need to take B4 back in time for their use.

Babylon Podcast: You’re not sure what happened to you, but you liked it… Happy Vorlontine’s Day, everybody!

If you can, please Donate!