Tim relates some JMS update tidbits for us — he’s working on an adaptation of Harlan Ellison’s classic “Repent, Harlequin, Said the Tick-Tock Man” (whoa!), and has written a spec script on the story of Harry Houdini and Arthur Conan Doyle investigating some unsolved murders in 1920s New York.

And as always, JMS has an open invite to come back and chat with us any time he wants, and also for Slice of SciFi to talk about any of those other cool scifi projects he has up his sleeve.

Deep Geeking: Tim, Summer and Bret chat about “The Well of Forever”, and there’s several points of disagreement on the content of the episode, and it could quite possibly be from either some lack of perception on our parts, or from looking to hard for a complex answer when it’s really much more simple than we think.

Summer believes the B story with Matheson and Mr Jones might have been served better as the A story, just because of the character depth and development potential that simmered underneath. 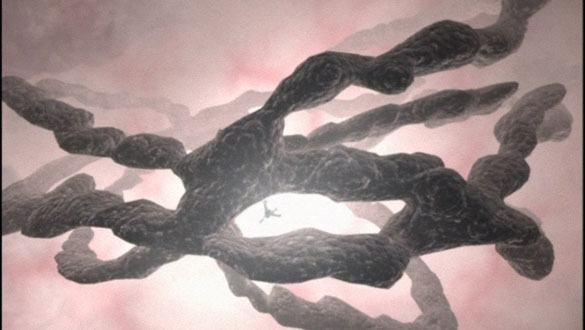 Additionally, Bret observes that Earth Alliance military ships with Greek names are doomed. They are the red-shirt ensigns of the B5 universe, and should be avoided at all costs.

The Jason Davis pointed out that Warlock class cruisers have names from the realms of magic and wicca, and Summer wonders why there weren’t any ships named after the gods and heros of Norse mythology.

Summer also wants a deck of those playing cards that Gideon and Dureena were playing with in the cafeteria. Badly. And yes, her deck of Pyramid cards really is between 25-30 years old.

Listener Emails: Nick Tuck also laments the dearth of B5 comics/graphic novels or web comics out there… why can’t we get more?

Nan from Ontario is still about a year behind in listening to Babylon Podcast, and still catching up, and while she’s offered a Trek-based comet explanation to help Tim in his “Day of the Dead” hate-on, but she realized the futility of it… but will continue to listen to the show to catch up.