Since the question keeps coming up, I realize that I hadn’t yet fully stated why having the alien entity in “The Path of Sorrows” going around forgiving everyone doesn’t work for me, and effectively breaks the story for me, like I’d promised to.

Hopefully this takes care of that.

In Show #236, a listener feedback episode, Tim reads an email from Adam in Idaho questioning why Summer has a problem with the scenario of a stranger granting forgiveness. He ends up going all oranges and apples, making illogical comparisons between forgiveness, acts of kindness and acts of evil intent, but overall had a decent question:

Now, for someone to do something nice for you, they have to make the effort. Even if they say they forgive you, they go out of their way to say it. Is it not possible then, that the simple fact that the creature told the crew in turn, I forgive you, enough? Didn’t it put their minds at ease? They needed to be told by someone else they were forgiven, because it wasn’t in their own power to forgive themselves. After all, isn’t it the thought that counts?

Also, isn’t it simply Summer is thinking too deeply into the matter? Would she have accepted it better if he had damned them for what they had done? By Summer’s line of reasoning, a killer can’t kill someone who is a stranger to them, because, why would he kill someone he doesn’t know? Now, don’t get me wrong, I like Summer, but, I guess I can’t understand why the creature forgiving them is such a problem for her.

Random Acts of Kindness have nothing to do with forgiveness, guilt, absolution and redemption, unless someone is performing those acts out of guilt for bad deeds they’ve committed in the past and are working to atone for (the premise of the show “My Name is Earl”, I’m told).

I’m not going to address Adam’s ludicrous premise of how my “line of reasoning” would also have to apply to killing, because that is so far out beyond left field that it’s roadkill on the highway running beside the parking lot of the ballpark. And it’s so intellectually dishonest as an argumentative statement in this discussion that I have no idea what point he was trying to make by saying it. 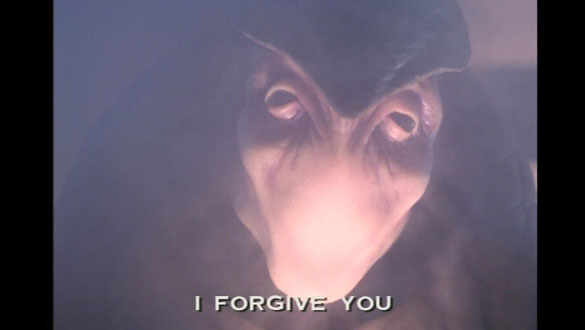 Granting forgiveness for hurtful actions typically falls to the injured parties to bestow.

The ability, the power to forgive what was done to them is the power that allows the injured to choose, in that one shining moment, to transform themselves from thinking of themselves as a victim, to choose to stop blaming someone else for the “bad things” that were done to them, to acknowledge that what happened in the past did happen yet does not define them or limit them in any way. Surviving what happened and choosing to move on is the core of what gives them the strength to forgive those who had hurt them for what they did.

Forgiving them doesn’t absolve them of having to atone for their wrongdoings, either spiritually, morally or legally, and it certainly doesn’t mean anyone condones their actions, even if the justice system never catches up to them, or isn’t in a position to get involved. [1]*

That’s why for me, forgiveness is something very different from, and personally more powerful and empowering than absolution from guilt and/or shame, and why — for me — having a telepathic alien say that they “forgive you” in some flippant blanket statement does not open the door to the path that can take Gideon, Matheson and Galen to a place of self-forgiveness, where they can let go and move on.

It may be just semantics to many of you, but it’s the elephant in the room that takes me completely out of the story.

To me, the word “absolution” implies relieving someone of their guilt, while the word “forgiveness” implies bestowing a pardon on or dissolving a grudge against someone for an injurious act or series of acts towards yourself.

Forgiveness does also apply to forgiving yourself, and releasing the pain of an injurious act done against you that you may harbor the blame for, for thinking that it was your own fault for “letting” that bad thing happen to you, but again, that isn’t something a third party can give you, not even by telling you that it’s okay to forgive yourself.

You have to get there for yourself, or you’re just faking it.

That is the huge difference in my book, and while it’s possible that I’m just using a narrower scope for “I forgive you” than JMS initially had in mind when writing “Path of Sorrows”, this is one of those rare instances where the writer in me cringes that the better word wasn’t used.

For me, that was the key in failing to get across a more specific intention that was so very critical to the story.

[1] Additionally, Karma is a vengeful bitch, and she tends to balance out the scales eventually, whether forgiveness has been bestowed or not. She usually just punches them in the mouth or the balls when they least expect it, and most deserve it.