Is the end of The Babylon Podcast looming near? Will the podcast be able to complete it’s own 5-year arc? Are there enough B5 related things for us to talk about to get us to February 2011? Is there even a remote possibility to push it to a 6th year? 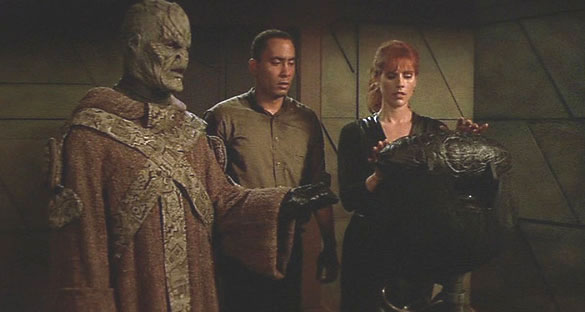 Tim believes the episode doesn’t quite pull together in as good a cohesive satisfying whole as it could have been, saving graces of the ability of various bipedal races to fart on command notwithstanding.

Does the episode suffer from having too many storylines going on at the same time? Would the story have been better served by being split into one more episode, or would the sense of urgency have been lost?

Discussion: Whoever called in the “Delenn the Ex-Minbari” Christmas parody, please call back and let us know who you are… props are well deserved!

Summer is enamored of the parodies listed on the “Ramming Speed” album by Sci-Fried, and be sure that we’ll be hearing more from them soon.

Steve from Denver corrects how many Shuttle flights are left; Fred from NJ relates that there’s a letter in support of Harlan Ellison written by JMS, dated July 1982, that’s “An Edge of My Voice” (a collection of Harlan’s LA Weekly columns from the 1980s, available from the Baen Webscriptions website); Hated Bunny wonders if the technology used by the Brakiri in “Day of the Dead” came from the technomages; Arkle doesn’t think Lyta’s appearance to Garibaldi was a dream, that it was her experimenting with her telepathic powers; and Mark sends an email to thank us for the hours and hours of entertainment we’ve given him.

Leave a Reply to Jhonny from Uppsala/Satai Cancel reply