As many of you know, Peter is a successful screenwriter and this CRUSADE story is a quirky adventure so good that JMS slated it for the second season. 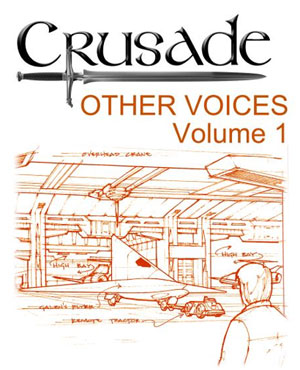 The script is called “Little Bugs Have Lesser Bugs” which reveals —

In Woodward’s introduction, written exclusively for this book, you’ll find out:

The other “voice” in this volume is that of Fiona Avery — BABYLON 5’s reference editor — who wrote:

“Patterns of the Soul” (where Gideon confronted Earth colonists who might have been infected with the plague while escaping the planet) and “The Well of Forever” (in which Galen hijacked the EXCALIBUR to find a mythical site hidden in hyperspace). We’ve included not one, but two drafts of each of these episodes to showcase the changes made between a writer’s first draft and the final production script. This way, no aspect of CRUSADE’s history will be unaccounted for. Also included is a complete analysis of each of these episodes, each one exceeding 40 pages. In these scripts, you will discover —