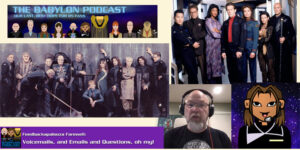 Thank you, everyone, for allowing our love of Babylon 5 to help fuel your own love for the show, and we are grateful that our efforts to explore a show we love also provided entertainment and enjoyment for you. Your voices and support over the years have meant a lot to us, and that you still want to hear us keep talking about everything B5, and not just Day of the Dead, warms our hearts.

For a brief moment in time (8 years actually since the project started) we were given new B5 material to enjoy, argue about and commiserate with. The books became invaluable aides as our discussions went on over the years ( in Tim’s case, on and on…).  The Script Books, Other Voices, the Chronologies and even the […]

If this book weren’t already titled CRUSADE: OTHER VOICES, we could have named it “THE LOST TALES” because this volume includes THREE never-before-published CRUSADE scripts 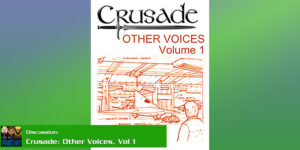 The Babylon 5 Scripts Team sent Tim and Summer a surprise this week, and just around the same time that they are releasing this latest scriptbook into the wild, you can hear us give you a sneak peek into the book’s contents.

Apparently, the increasing value of the Babylon 5 scriptbooks keeps causing a ruckus, and The Team is doing something about it, while they can.

That’s why they’re holding a Script Books Series Lottery — to make available as many full sets of the script books as they have left.

Tim and Summer are joined by The Jason Davis to talk about the adventure that was the records excavation that became the new volume “Artifacts from Beyond the Rim”.

Deep Geeking: The year we really did finally make it to Crusade.

Going by the revised broadcast order, our first Crusade episode to geek on is “Racing the Night”, and Jason joins us for the analysis.

LIMITED EDITION
This is a limited edition book. It is only available for ninety days. After January 20, 2011 this book in both the black cover and the white will never be available again. Ever.

Inside CRUSADE: WHAT THE HELL HAPPENED? Volume One’s 402 pages, you will find: J. Michael Straczynski’s introduction, revealing– * The first part of what the hell really did happen to CRUSADE, in Straczynskian detail, chronicling what he describes as the “birth, short life and long painful death” of the series. * How he nearly wandered […]

I just read the announcement at B5 Books, saying that the Crusade: What the Hell Happened? books are finally coming our way, with Volume 1 releasing on August 25… Then, I read the good part: “Why,” you inquire, “is this a FOUR-volume series when we were promised THREE in the introduction to CRUSADE: BEHIND THE […]