Along with Troy Rutter, we also speculate on ways B5 fan films and fan shorts might be allowed by WB, to keep fan interest abuzz, much like Paramount eventually relented and began allowing fan films to exist without litigious intervention. 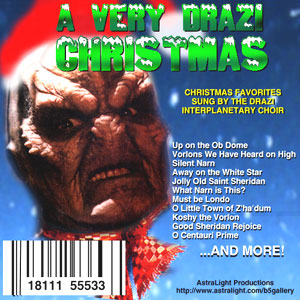 Troy tells us about the history of the Official B5 website, and his involvement from “The Gathering” on forward, including some rare early promotional items and online goodies, and the birth of “A Very Drazi Christmas”.

Feedback: Gary lets folks know that the original version of “The Gathering” (first aired edit, Stewart Copeland’s music) is now available on Hulu; Gary wonders why Zoe appeared to Lochley, and Tim still refuses to embrace quantum physics as an explanation for what happened in “Day of the Dead”; Gary wishes for more “management level” interactions from Psi Corps; Doug from Bremerton reminds us that Bester has been fighting “the war” against mundanes for a very very long time prior to the events in “The Corps is Mother, The Corps is Father”; more commentary on the use of dentics in Farscape as an example of future dental hygiene.