Summer is still hopping about the lack of B5 parody holiday music, and especially the lack of Halloween alien heads. It’s time we send out a call to the fans to get working on that… it’s never to late to breathe new life into any SF franchise for either humor or crass commercial endeavors! 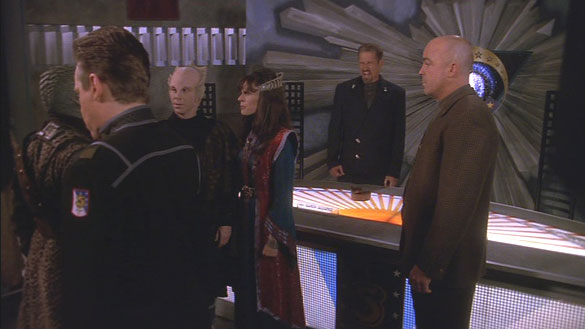 Deep Geeking: Tim and Summer discuss “And All My Dreams, Torn Asunder”, including production questions that Jeffrey can lend insight to. I bet you didn’t know that it took a technician to create that perfect “bed head” look, didja?

The fallout from the convergence of information gathered by Garibaldi, evidence from autopsies performed by Franklin, and the discoveries made during Lennier’s investigation begins. The overwhelming preponderence of evidence has to be presented to the Alliance and the lines are drawn.

Discussion: Jeffrey gives us a rundown on the details of what an associate producer will usually do on a series, and how it differed from his role as producer’s associate.

Tim in KC asks us to theorize on a “Day of the Dead” paranormal meetup regarding who G’Kar might have been visited by; Gary is thrilled by the recent Aries launch, and relays Buzz Aldrin’s disappointment with the lack of real spaceflight progress; Val in NY shares her appreciation of the train wreck episodes (she may be in the minority, there).

Doug asks in an email if any B5 fans can help identify the rock song playing in the background at the end of “Midnight on the Firing Line” during the final scene with Ivanova and Talia, and Jeffrey surmises that it may well have been composed by Christopher Franke instead of an outside artist. Anyone want to do some research and compare that song to existing tracks from Tangerine Dream?