We have no Vorlon tonight, but he did send us a message about the successful docking of STS-131 with the ISS. And we really need to get Bret to get on the horse and start providing us with more B5 goodies from his back pocket.

Deep Geeking: Tim, Summer and Bret weigh in on “Thirdspace”, the good the bad and the ugly of the movie. One of the TNT projects, it was much anticipated, but contained a few more warts than the die-hard B5 fans had become accustomed to over the previous seasons. 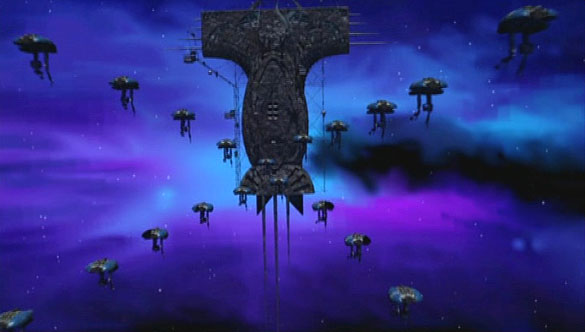 How deep was the suspense, and was the payoff equal to the build? How apparent were the Lovecraftian undertones, if you weren’t aware that’s where the influence came from?

Smackdowns: What will we argue about more in the near future: “Day of the Dead” science, or the reasons given for why the station was blown up?

Voicemail: Jason from Murfreesboro wonders if Franklin had taken into account the use of hired telepaths to pluck the passcodes from Franklin’s mind when they wanted to grab his medical research; Neil from Bowie recounts his enjoyment of the Jerry Doyle interview; John from Jersey weighs in on “Sleeping in Light”, and his recollections of watching it the first time; Neil from Bowie comments on interpretations of Lady Morella’s prophecies; Neil from Bowie jokes about the short-lived TV series “Touched by a Vorlon”

Parody/Filk Songs Wanted: If you know of any B5-related fan songs out there, definitely let us know, so we can let other B5 fans know where to buy them! If the CDs are out of print, let’s brainstorm on ways to get those songs back out there for fans!