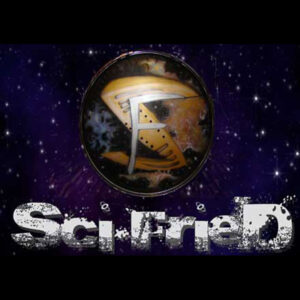 Remember a few weeks ago, when we had some of the guys from Sci-Fried on to chat about Babylon 5, and geek rock parody songs?

Well, you might have heard some of the discussion if you tuned into the live feed that night, about how I couldn’t get the lyrics for a BSG parody song out of my head… that they’d been in there for a few years now, but I was stuck and unable to complete the song.

Chuck was curious and wanted to see the lyrics, and I sent them to him, saying that they were more than welcome to complete the song, and how much I’d love to hear it if they did record it.

Well, record it they did.

there is a ship on new caprica
they call colonial one
it started the ruin of many a clyon
and no, baltar is not one

a mother, she was a toaster
here to breed new cylon genes
and brother, he was loving the schemes
to make those frakin’ baby machines

now the only thing starbuck ever needs
is her cigar and big gun
that guy one eye col tigh was satisfied
with ellen, or alone and drunk

there is a ship on new caprica
they call colonial one
it started the ruin of many a clyon
and no, starbuck is not one

And feel free to download the large version of their logo, and include the lyrics, if you love having such goodies on your iPod Touch like I do!