Summer wishes that we’d had more of a heads-up about Amazon’s $100 sale on all 5 seasons of Babylon 5, so that we could encourage a buying frenzy and start an entirely new round of Deep Geeking on the series. Anything we can do to keep the podcast going.

At a recent Orange County Screenwriters event, JMS stated that both he and WB are interested in doing a 20th anniversary story for 2013… so let the feeding frenzy begin.

Tim gripes yet again about the lack of forward motion on the Lensman project, and Summer would sign an NDA in blood if it’d get her a copy of the B5 shooting script once production starts, and starts the ball rolling on trying to come up with an Earth Alliance ship name to be used in the movie. 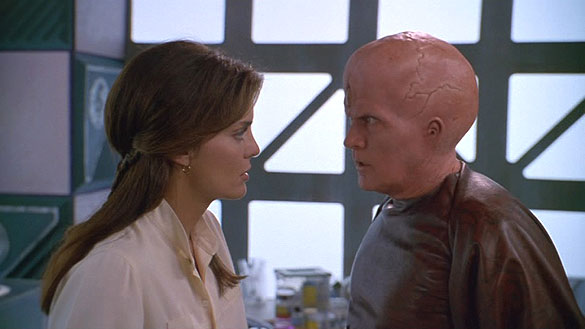 Deep Geeking: Tim and Summer discuss the TNT Movie “River of Souls”. They talk about the pacing of the story, watching the character quirks slide seamlessly back into place, and humanity’s ever-present search for immortality and the unwise choices it seems to lead us to doing.

Listener Emails: Michael Johnston daydreams that we had some advertisements from Adobe; puts forth his theories on the “magic chalk” that Tim has so many problems with, and some alternate pairings; Gary Henderson throws out theories on who Dr Franklin might have seen had he been part of the Day of the Dead; Frank believes that Morden was subsconsciously called in by Lennier’s repressed feelings and self-denial; Kevin gives us his “B5 viewing while ill” story, and he didn’t watch a B5 marathon, but instead listened to about 50 episodes of this podcast; Frank in Baltimore lets us know that the writing on the artifact in “Thirdspace” was just basic advertising.