Across Time and Space: The Chronologies of Babylon 5 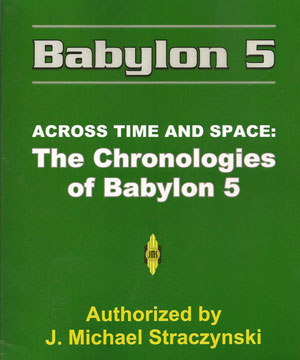 * For the first time ever available in print and authorized by J. Michael Straczynski

* Up to the minute — includes “The Lost Tales”.

* Includes information that has not been published in a decade from out-of-print publications such as the Official B5 magazine.

* The ultimate Babylon 5 reference because it weaves the entire B5 universe into a cohesive narrative.

* Includes data from all televised episodes of Crusade and some that weren’t even produced.

* Includes an introduction by Fiona Avery, reference editor for Babylon 5 and Crusade (and writer of 3 Crusade episodes).

Now you guys know what project I was helping out on last month! Yay!

Also, you have until August 23rd to submit questions for JMS regarding any of the B5 movies, in “Babylon 5 Scripts of J. Michael Straczynski: TV Movies”.

Quote: With this book is a special opportunity. For the first time J. Michael Straczynski is letting fans ask any question they want about the four TV Movies “Thirdspace”, “The River of Souls”, “Legend of the Rangers” or “The Lost Tales”

Scroll down to the bottom of the babylon5scripts.com page for the submission link.