The second volume of the “Asked and Answered” series is now available from B5Books.com 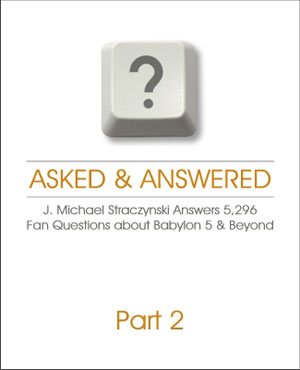 FAN INTERACTION
JMS discusses his experiences at conventions: what the adulation is like, how it feels to be behind-the-scenes, how and why he signs autographs for 3-4 hours at a time, what really happened at the Wolf Convention (and why he won’t apologize), what it feels like to see fans standing in line for hours just to see him, his hilarious message to a Gallifrey One panel when he couldn’t attend, fan fiction — how he feels about it as a writer as well as the legal ramifications, why he discouraged fans from a letter writing campaign to ensure a fifth season, why he believes fans have a right to complain, and how the fans inspire him.

FIVE YEAR ARC
How the arc was structured, what the cast and crew really knew about where the characters and story were headed, specifically what JMS had mapped out and to what level of detail, who had seen the entire series outline (and who hadn’t), which actor knew the most about the entire arc, why he wouldn’t leak a fake 5 year arc, what would happen if anything happened to him during the series run, why he wrote the arc so that the fans could never know for sure what was going to happen next, how he wrote the show so fans would not be lost if they missed an episode, what one question he intended not to answer at the end of the 5 year arc, why he structured the show as a novel, how he balanced the characters over the 5 year run, why Babylon 5 was a 5 year story and why he could never extend it (even if he wanted to), what he meant by “accelerating the arc,” how he compensated for cast changes, how the long wait to sell the show to the networks benefited the arc, specifics about how he adjusted the arc on the chance the show was canceled after the fourth season, how he wrote the arc so that nuances would surface for fans watching the series for a second, third or fourth time.

FUN WITH JMS
This compilation of responses groups the best of J. Michael Straczynski’s online repartee, banter, bon mots, comebacks, quips, retorts, sarcasm and witticisms on topics such as holidays, typos, the truth, Sinclair’s “duck”, being a Techno-mage, the longest sentence he’s ever written online, the one word he uses to describe Babylon 5, a wedding toast, the one thing he can never do, the story behind the jet that nearly landed on his head (no joke!), his struggle with the word “epitaph” and what happened when he channeled Zathras.

INFLUENCES – FILM, TV & MUSIC
JMS discusses his favorite movies (and how they influenced Babylon 5), what he considers the best TV show ever produced, what TV shows he watches, his favorite watch’s connection to Rod Serling (and how Rod Serling profoundly influenced him), what music he listened to while writing Babylon 5 and why he considers himself a “musical mutt.”

INFLUENCES – HISTORY & LITERATURE
JMS writes about how ancient Babylon relates (and doesn’t relate) to B5, how much of Babylon 5 and other JMS writings borrow from history, the spark that originally got him interested in language (and how that is a big part of Babylon 5), his favorite SF books, what makes him most nuts about B5 being compared to other works, how Z’ha’dum was not inspired by Dante but by a legendary Greek figure, how classic heroic stories have influenced B5, why he created a show with a timeline, what happened when he rewatched an old episode of He-Man he had written, how Tolkien’s work was instrumental in the creation of B5 but how Lord of the Rings was not, the importance of Norman Corwin and Mark Twain to his own work.

JMS ON JMS
JMS comments on life after B5 including why he stayed in television, what it feels like to be considered an A-list feature writer after a career on the small screen, working with Ron Howard and Clint Eastwood and how the Cannes premiere of Changeling was the most surreal experience of his life. All this plus the most personal side of JMS: his likes, his loathes, how he feels about vacations, shyness, why he doesn’t have kids, favorite colors, food, what’s in his office, aging, the complete Buddy story, his extensive knowledge of Superman and what the super hero means to him, lucid dreams, the one school subject he failed (3 times), college life, what happened when he encountered a tachistoscope, how the Babylon 5 success affected him, what it’s like to be called The Great Maker and the dumbing down of television.

JMS ON POLITICS
In this section J. Michael Straczynski addresses issues that bobbed and weaved throughout Babylon 5’s run including a citizen’s responsibility to their government, why he believes that government should have no interest in religion, how the aftermath of war holds more possibility than war itself and how civility can be employed in political campaigns.

LAST DAYS & LEGACY OF BABYLON 5
JMS recalls how the industry reacted to Babylon 5’s novel-for-television structure, why he never considers himself an SF “superstar”, the aspects of B5 that he is most proud of, what it’s like to be the guy who created B5, how he reacts to others’ interpretations of the show, the lessons he learned producing B5, his feelings on the set the last day of shooting, the truth behind the “cast turmoil” over the ending of the show, his reaction whenever SF shows are compared to Babylon 5 and what has to happen for there to ever be more Babylon 5 on the screen.

MERCHANDISE OF BABYLON 5
JMS discusses merchandising philosophy, the toys that did happen and those that didn’t, why he wouldn’t approve a B5 theme park in Las Vegas, the history and behind-the-scenes of the B5 comic and how it impacts the show’s canon, all about the Babylon 5 novels, the DVDs, the Revell Starfury model, the history of the 14-volume limited edition script series — why he did it and what he hoped to accomplish.

MUSIC OF BABYLON 5
In this section JMS talks about his goals for B5’s music, how his musical tastes influenced B5, why Stewart Copeland scored the pilot but didn’t score the series, how the composer times his score to picture, how he decides which music goes where, how JMS and Christopher Franke worked together, why he changed the theme each season, how Chris worked with an orchestra in another country and why JMS didn’t change the music in the end credits at the start of season 3.

ONLINE EXPERIMENT
J. Michael Straczynski’s interaction with fans in the online world is showcased in this section which focuses on the highs…and the lows of that ongoing conversation. With messages dating back to 1991, JMS addresses why he put himself in an Internet forum, his concerns about fans having too much information, his motivation for his exchanges with fandom, specifically how his online conversation with fans has been helpful to the writing process (and how it has not), the biggest benefit to his online presence, how he “waved” to the GEnie forums in the pilot, how he remained unaffected by what he read online, why fans couldn’t post story ideas, what he really thinks of the online communities, his move to the moderated newsgroup, how he handles criticism, details of one of his worst experiences online and his thoughts at the 10 year mark of his online experiment.

PHYSICS & BABYLON 5
The “sound in space” issue is thoroughly explored along with how JMS tried to incorporate real physics into the show and details of the Starfury launch sequences, the science behind it and the difficulty of showing speed in space.

PLACES & PLANETS
This section features on questions about Centauri Prime’s moon, Earthdome, Epsilon 3, Proxima 2 and the much more popular Proxima 3, jumpgate ownership, why a jumpgate was built at Sigma 957, the rim and what really exists beyond it (the philosophical implications are staggering!).

PRODUCTION OF BABYLON 5
Harlan Ellison’s involvement kicks off this package of posts along with how much material was edited out of each episode, what JMS cut that he wishes he could put back, how the editing process works and how it impacts what the fans see, the varied shots used by directors to tell the story, how JMS learned not be upset by production glitches, what he would go back and rework if he could, how the B5 production model differs from most other shows, how he and the team handled revisions, step-by-step what happened from script to screen, how JMS got the most value from the budget, why there wasn’t a bathroom scene in the pilot, what he would have done if he had had $1 million more per show, how the crew expressed their “feedback” to JMS and his policy for how opinions about the show were to be expressed and how directors maintained his vision for the show.

My dog and I are being attacked by a duck…