Tim and Summer venture down the rabbit hole, and ponder the implications of the vast lack of dental hygiene portrayed in science fiction television. Are SF TV writers simply avoiding having to create new dental technology, or having to explain the continuing use of bristles on a stick, or is it simply to save precious minutes for real storytelling? 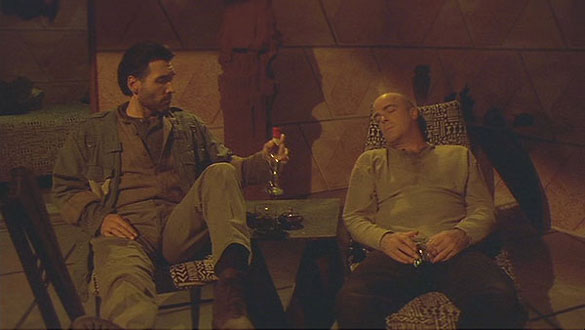 Deep Geeking: This week, we discuss “The Ragged Edge”, a pivotal episode in the growth of both the Interstellar Alliance and G’Kar; and in the fall of both Centauri Prime and Michael Garibaldi.

We talk about the hestitation of G’Kar to embrace his new role as spiritual guide for the Narn, and Ta’lon’s role in helping him open up to the possibilities from being a spiritual teacher; about Garibaldi’s slow fall back into the bottle having dire consequences for his safety and his friend’s life during a mission; and the revelation to the core group about the different Centauri factions at work in the royal court, the probable connection of one of them to the raids on Alliance member worlds and the likely threat level to Londo’s life should he find out and go asking the wrong questions in the wrong places.

We also ask the question “Who killed Tafiq?” because of the uncertainty of whether or not the same people who killed him were also the same ones who killed the pilot.

When seeking instant enlightenment,
You must put your face in the book.

Feedback: In this week’s emails, we address the changing appearances of the Drakh, and whether “Drakh” is a name for a collective of races instead of for a single race of dark servants; some theories of the extent of Lyta’s enhanced abilities against mundanes being stronger than they might be against a Psi Cop, and some speculative casting for a B5 “reboot”; anecdote on the pulling of Zima from Austin Powers; and a few more opinions on spirituality and religion and the vast grey area encompassing both.