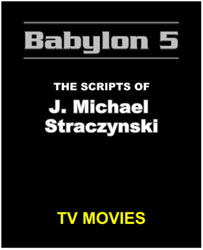 These TV Movie scripts are twice the length of a single episode of Babylon 5 and are the page count equivalent of EIGHT episodic scripts making it the second biggest book ever with more than 450 pages!

ALL THAT PLUS THESE SPECIAL BONUSES

• The included version of The Legend of the Rangers is an early draft that is 20 pages longer than the script that was filmed, which means you get to read scenes and exchanges of dialog that never made it to the screen.

• Exhumed from Joe’s vault, a 3-page fragment of an outline detailing the premise for a Psi Corps feature film . Focusing on The Telepath War, and appropriately titled “Wars of the Mind,” JMS’ notes reveal the background of the conflict — teeps vs. teeps, the cast of characters — including the identity of the Interstellar Alliance’s Vice President, and the explosive deaths of two B5 regulars — something hinted at, but never stated in an official series document.

• The lost tale from The Lost Tales. Did you know that there were originally three lost tales, not two? The middle segment, never produced due to production considerations, featured Michael Garibaldi making a startling discovery on Mars. Only a handful of people involved in the production have ever read this script, but now you can enjoy this “lost” installment.

• The original short story on which The Lost Tales segment “Over Here” was based. It’s called “The Darkness Between the Stars” and was originally published in the now out-of-print seventh issue of The Book of Dark Wisdom (Fall 2005). See how JMS adapts a story from one medium to another and witness a different ending than the one that concludes the B5 version.

• J. Michael Straczynski’s personal, behind-the-scenes photos taken on the set of The Lost Tales and The Legend of the Rangers — included in these 36 images are the last pictures taken of Andreas Katsulas as G’Kar.

And much more. Order here by April 30