The third volume of the “Asked and Answered” series is now available from B5Books.com 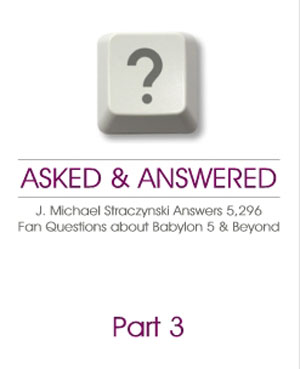 Rants, religion, money, sex and Star Trek… just a few of the topics covered in the most volatile release of the entire Asked & Answered series.

RANTS
This is JMS unplugged. He shares his thoughts – unfiltered and often exasperated – on a breadth of topics including: the sound in space issue, comparisons of Babylon 5 to Shakespeare, Lord of the Rings, Dune and every other saga of any import, atheism, language and culture, the idea that a five-year arc prohibits the organic development of a story, the perils of being the topic of an online forum, religion in Babylon 5, predictability of stories, why he almost quit the online community forever, why the tone of his online posts changed over the years, and how he really feels about people expressing an opinion that conflicts with his.

RELIGION
This section covers a wide range of religion related questions including: What are the religions of each alien species? What are the spiritual convictions of the principal human characters? Why is religion in the 23rd century a valid premise? How did Earth’s religions deal with the existence of aliens? Why do B5’s alien races have more than one religion? Why did JMS showcase religion when most TV shows avoid it? What happened when the topic of Babylon 5 was raised at a multi-faith meeting of interdenominational leaders? What are JMS’s thoughts on the pagan group that makes its new members watch B5 in its entirety?

REMUNERATION AND MONEY
How much was JMS paid for Babylon 5? How much does money matters to JMS? Could JMS have gotten a better deal for the show? What does JMS spend money on? Why has he never gotten a cent of residuals on the DVD sales?

SEX
What are the hookers are like on Babylon 5? Why does prostitution still exists in the 23rd century? Can different species breed with each other? PLUS JMS’s thoughts on bi, gay and lesbian characters.

SPECIAL EFFECTS
How does CGI impact the script? Why did JMS choose CGI over models? How did B5’s space shots differ from what came before? What happened when California wildfires threatened the visual effects facility? PLUS over 30 questions and answers detailing the show’s pioneering use of computer generated imagery.

SHIPS
How did JMS design the Vorlon ships? Which ships can enter B5’s space? Who can use the station’s facilities? How do Starfuries launch? PLUS details of the unused Northrodyne C31-03 Patriot, details of Starfury design down to their engine parts, and the facts about White Stars and other alien spacecraft.

SOUND DESIGN
What is “walla?” How was B5’s soundtrack different from those of other shows? What was JMS’s fresh approach to the sound of weaponry? Which of the unique sounds on the show were original creations (and which where not)? What are “wild tracks?” PLUS the truth about Kosh’s voice.

SPECIES
Everything you ever wanted to know but were afraid to ask in 256 questions about: Centauri, Drazi, Humans, Minbari, Narn, pak’ma’ra, Shadows, Vorlons and other First Ones. PLUS detailed explanations about their characteristics and their histories (don’t miss JMS’s note comparing and contrasting Narn and Centauri history or his detailed list of the which races were at war or allied at the time of the pilot) as well as the theories behind the design of each race.

STAR TREK
Did the Babylon 5 crew ever socialize with any of the Star Trek crews? How did Babylon 5’s budget compare to that of the various Star Trek series? How did JMS fight allegations that this concept or that idea was originated by Star Trek? Is JMS “the next Gene Roddenberry?” Does it make JMS crazy when every article compares Babylon 5 to Star Trek? Did Paramount use JMS’s concept to create Star Trek: Deep Space Nine? How did Deep Space Nine most impact Babylon 5?

ALL THIS AS WELL AS SECTIONS COVERING: THE TITLE SEQUENCE (JMS offers insights and anecdotes about the show’s varied title sequences, including the concept, the visuals and the narration), THE UNIVERSE OF BABYLON 5 (Featuring detailed histories and background including the Earth/Minbari War, Earth’s first contact with alien life, and the funding of the Babylon Project despite four failures), THE SHOW’S VISUAL AESTHETIC (Including logos, graphics and cinematography), THE WARDROBE (Highlighting costumes, makeup and prosthetics)

and last but not least —

WRITING BABYLON 5
A comprehensive section with thorough discussions of the cast, the characters, the episode titles, the origins of the story, the planning of the series, the process of writing the scripts, story structure, themes, JMS’s personal dedication, the achievement and the reactions gathered along the way.