The fourth volume of the “Asked and Answered” series is now available from B5Books.com 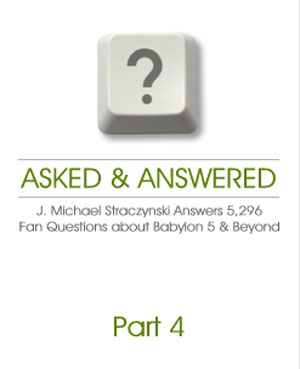 Asked and Answered Part 4 is J. Michael Straczynski’s real-time history of the beginnings of Babylon 5: from before the pilot (including the online announcement of the series) and through Season 1.

Part 4 is loaded with details that never made it to the screen as well as the origins of what did eventually air.

As you move through the following topics, you’ll relive what it was like to be part of Babylon 5’s launch:

This section also includes JMS’s first archived post about the show (and it’s so early in the process that he even hyphenate’s the show’s nickname as B-5). Here’s just a small sampling of the details he discusses in this section:

* The designing of prosthetics to prevent actors from being typecast;

* The moment JMS changed “Jackarr” to “G’Kar” and why the switch was made;

* The reasoning behind the design of PPGs;

* The process of hiring a composer (including his interactions with pilot composer Stewart Copeland of The Police);

* The development of Babylon 5’s production design (including the design of the Garden, the video displays throughout the station, CGI for the Vorlon ship, early uniforms) along with concepts that were scrapped like the “Being Mover”;

* An early description of the chrysalis device Delenn would eventually construct across Season 1;

* The announcement of each cast member along with the insider scoop on the auditions;

* What happened when the cast read the script aloud for the first time;

* Clues JMS told viewers to watch for in the pilot that would pay off down the line;

* The unused opening narration for the pilot;

* The reasons for the long delay between the pilot and the series;

* Negative feedback from industry insiders after a private screening;

* The link between the pilot’s airing and Oprah;

* The actor in the end credits of the original pilot edit who was not in the show and why;

* The scenes cut from the original edit of the pilot;

* A step-by-step account of how JMS re-configured the pilot for the TNT Special Edition;

* The whys behind the cast changes from pilot to series;

* Why JMS chose to shoot Season 1 in secret for a month before announcing that filming had begun.

Following the pilot section, Asked and Answered Part 4 moves into fan questions about the particulars of Season 1 with entire sections dedicated to the following episodes:

* Midnight on the Firing Line
* Soul Hunter
* Born to the Purple
* Infection
* The Parliament of Dreams
* Mind War
* The War Prayer
* And the Sky, Full of Stars
* Deathwalker
* Believers
* Survivors
* By Any Means Necessary
* Signs and Portents
* TKO
* Grail
* Eyes
* Legacies
* A Voice in the Wilderness Part 1
* A Voice in the Wilderness Part 2
* Babylon Squared
* The Quality of Mercy
* Chrysalis

And if all that wasn’t enough, Asked and Answered Part 4 begins with detailed insights about J. Michael Straczynski’s career as a writer – a compelling look behind the scenes at the life of Babylon 5’s creator.

This section’s topics include: how to become a professional writer, tips on good writing, what life is like for the average TV scribe, why he doesn’t put his name on freelance scripts he re-wrote, how much of himself goes into his characters (and which ones), what issues are worth writing about, the irony of copyright law as established by the Berne Convention, the essential ingredient for all drama, what he would do if he could no longer write scripts, his exercise in song writing for “Walkabout”, G’kar’s impact on a terminally ill patient, what a showrunner thinks when he’s watching other people’s shows and what compels him to write.

Given the depth of content inventoried here, it’s no surprise that Part 4 contains 1,073 missives packed into 414 pages – the biggest book so far of the Asked & Answered series.