Deep Geeking: This episode revolves around geeking on “Knives”.

Deep Geeking: This episode revolves around geeking on “In the Shadow of Z’ha’dum”, a pivotal second season episode that remains a powerful episode to watch even after all these years.

Interview: Tim and Summer chat with SF author Jeanne Cavelos about her contributions to the Babylon 5 universe: the novels “The Shadow Within”, and the Passing of the Technomages trilogy. 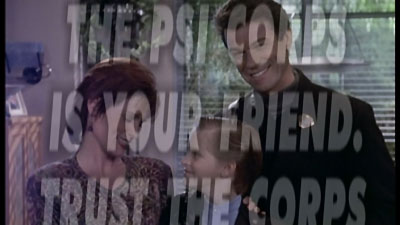 Deep Geeking: Tim and Jarsto talk about the entertaining and revealing episode “And Now For A Word”, where an ISN news crew is sent to the station to do a routine “36 Hours” report, and end up being caught in the crossfire as Babylon 5 gets caught in the middle of the shooting war between the Narn and the Centauri.

Deep Geeking: Tim C. and Summer talk about the entertaining and revealing episode “There All The Honor Lies”, wherein Sheridan is lured into being suspected of murdering a Minbari, and many secrets and half-truths are shaken out during the course of investigating what happened.

Interview: Tim, Summer and Jeff talk with conceptual artist Tim Earls and the work he did on Babylon 5 for several seasons.

Deep Geeking: Tim and Summer delve into discussion about “Hunter, Prey”. In this episode, Sheridan begins to deal directly with Kosh, and the staff begins to wonder more closely about the hints dropped about Vorlon ship technology.

Deep Geeking: Tim and Summer delve into discussion about “Acts of Sacrifice”.

Deep Geeking: Tim and Summer delve into discussion about “All Alone in the Night”, which by Tim’s definition is the second season’s equivalent of “Infection”.